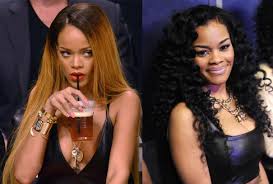 So much for a peaceful day in the Twitterverse.  It all apparently started a few weeks ago when Teyana Taylor posted a video on her Instagram account of herself singing “Caught Up in the Rapture” by Anita Baker.

(Can I just say that homegirl went IN?!?  Those vocals slayed chile!!!)

Anywhoo, the other night Rihanna posted an Instavid of her male hair stylist wearing a curly wig and snapback, singing the same portion of the song.  Well, Teyana caught that obvious shade and took to Twitter to go in….and let have!

Don’t play wit me rihanna f-ck all this industry sh-t, YOU & I know each other VERY well. Throwing subs 4 wat? u got my #, don’t show off.

y’all could bully everybody else & get away wit that sh-t but that sh-t ain’t gone work ova here. so y’all could miss me with that NAVY sh-t

i sing caught in the rapture on IG then she posts her boy singing the same song, the same part, with curly hair and a snap back???

petty is petty and shade is shade, bitch knew what the fuck she was doing. 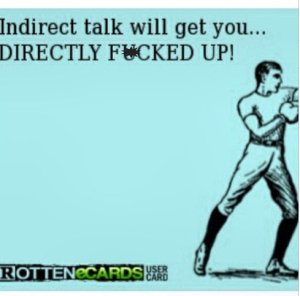 Rihanna made an honest attempt to reclaim the shady throne when she tweeted:

Screaming in an empty room! #dontfeedtheanimals

I REFUSE to help your career…you will NOT get an @ from me! Not til you pay me! #iRefuse

To which Teyana responded:

Melissa & Robyn never been about that life. Them b-tches know wassuppp!

Sh-t I Hate Broke B-tches Too.

This takes us to the Lightning Round!
Rihanna decided to provide receipts for the win.  She changed her Twitter header to a side-by-side net worth comparison of the two. 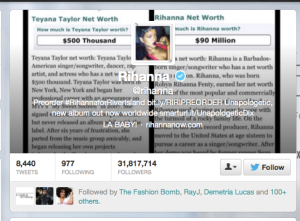 Rihanna had to know that financial shade can’t keep a hood bitch down.  Teyana responded by tweeting:

Ya net worth & ya body count go neck to neck. #IndustryPussy

She then decided to up the ante by uploading this photo as her Twitter header: 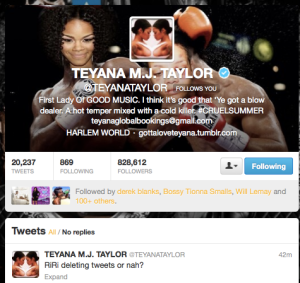 These heauxs are really cutting up.  I see that they both graduated with honors from the Chris Brown Institute of Social Networking.

This will DEFINITELY be a topic of discussion on this week’s show.  So……who do you think won this battle?