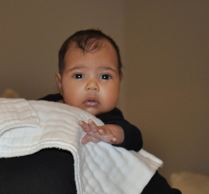 Yup, it’s true!  Kanye West stopped by his mother-in-law’s new daytime talk show “Kris” to talk about life as a new father and his love for Kim.  He also took a second to address the rumors that they were holding out for the highest magazine deal to release photos of the baby.  He  stated that they would not be putting anything in any magazines, but that he definitely wanted to show a photo in order to rid himself of the paparazzi that are so desperate to get the first shot of “Nori”.  To prove his point, he showed off an adorable photo of his baby girl.

As the audience ooh’ed and aah’ed, Kanye said that he “prays that she looks like her mother”.  Kris said she thinks that Nori has Kim’s eyes, Kanye’s cheeks, and lips that are a blend between the two.  When asked how parenthood has been for them, Kanye stated “It’s brought us closer because there is someone more important than us to us for the first time”.

He also took the opportunity to squash down any rumors about his fading love for Kim Kardashian.  He says that it was definitely love at first sight because “I was in love with her before I even got to talk to her.”  He also said “She’s definitely teaching me and helping me to be a better person.  There’s only one brand now, and that’s family.”  Kris Jenner added, “The love that’s in my house right now is ridiculous and so beautiful.”

Proud granny Kris Jenner took to Twitter to post the cute photo for anyone that may have missed the show.

Congrats to Kanye and Kim on enjoying a normal family life.  Well, as close to normal as a Kardashian can be. 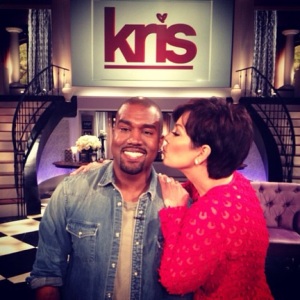